HOW TO PUT AN END TO NECK AND SHOULDER PAIN AND STIFFNESS — WITHOUT TAKING PAINKILLERS, WITHOUT RISKING SURGERY AND WITHOUT EXPENSIVE CHIROPRACTIC BILLS 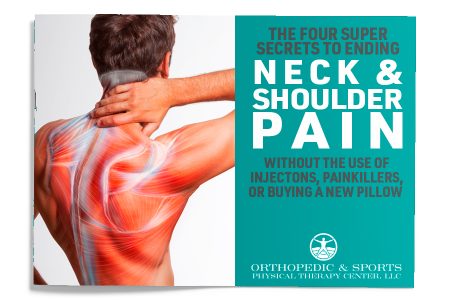 If you have neck and/or shoulder pain, it’s very tempting to think that it will go away on its own. You might want to pass it off as having just “slept awkwardly,” or tell yourself it’s just a little pain that everyone your age suffers from.

There’s no obvious reason why it happened—but it doesn’t seem to be going away!

If that’s happening to you, you’re not alone: we hear this type of thing all the time. In fact, neck and shoulder pain and stiffness are among the most common problems that we see at Orthopedic & Sports Physical Therapy Center!

And when it comes to living with neck and shoulder pain, everybody we see wants to know:

"WHY IS THIS HAPPENING TO ME?"
OR
"WHY AM I STILL SUFFERING AFTER PUTTING UP WITH THIS FOR SIX MONTHS (OR MORE)?"

Most people hope that they’ll wake up one morning and “like magic,” it’ll be as if their neck or shoulder pain never happened. But it never works, and the longer these people wait, the worse their suffering becomes.

Another scenario we see all the time is people whose doctor tell them to rest, “try these painkillers,” and “see how it goes.” But this is rarely the best advice, and six weeks later, they end up going back to the doctor for more pills because it hasn’t got any better.

Has This Type Of Thing Happened To You?

Maybe you’re confused, because you’ve been told different things by different people. Maybe you think you have a neck problem — but it’s actually your shoulder where the problem is? It’s a very confusing part of the body to identify the location of the pain source, and this often leads people to procrastinate and put off making a decision about what to do to help fix their neck or shoulder pain. Worse, many people just end up accepting it as ‘part of life’ — as if it’s normal, as if it “has” to be that way.

IF YOU'RE CURRENTLY LIVING WITH NECK OR SHOULDER PAIN, HERE ARE SEVEN MORE REASONS WHY IT COULD BE LASTING LONGER THAN IT SHOULD:

If any of these have happened to you, we would love to invite you to schedule a complimentary phone consultation with one of our top-rate physical therapists, so we can help you. The fact that you’ve tried any or all of these things already, like many people we see, is actually a GOOD THING! When you know what doesn’t work, you are closer to finding the thing that does!

Click the link below to schedule a free phone consultation. The call is free, and there is no obligation to book any appointments with us after! Our goal is to help you make the right decision about what to do next.

Arrange to speak to a therapist

Note: Free Discovery Sessions are offered for individuals that are nervous or skeptical about Physical Therapy. So if you feel relatively hesitant, allow us to work together to find out what is wrong and what can be done. We are here for you!

"WHAT CAN I DO TO GET RID OF MY PAIN QUICKLY?"

Well, here are four things you can do:

If you would like to know how the team at Orthopedic & Sports Physical Therapy Center can help you live with less neck or shoulder pain, we invite you to start with a complimentary, no-obligation, risk-free appointment:

Apply for a free Discovery Visit

Note: This complimentary Discovery Session is something that we offer to people who are new to physical therapy, skeptical of its benefits, or unsure if it is right for them. If that sounds like you, then please start with a Discovery so that we can work with you to find out what is wrong and what can be done—without any financial risk on your part.

So the final question is…

HOW CAN CHOOSING TO SEE A PHYSICAL THERAPIST AT ORTHOPEDIC & SPORTS PHYSICAL THERAPY CENTER HELP YOU GET RID OF YOUR NECK AND SHOULDER PAIN IN THE NEXT FEW DAYS?

Here are a few things our physical therapy team can do for you:

Basically, we can help you get back to living life free from the curse of chronic neck and shoulder pain!

If you want to know what it costs—and what availability we have in our office – then please just click the button below and complete the short form:

Please enjoy these testimonials of other people just like you who came to see the team at Orthopedic & Sports Physical Therapy Center — and left much healthier and happier within just a couple of weeks:

I used this facility both pre-op and post-op neck surgery with excellent results. Both my Therapists were amazing! They were very professional, friendly and courteous as well as excellent teachers, which was very helpful in understanding my treatment. I left with valuable information on how to do exercises at home. I would highly recommend this facility to anyone needing Physical Therapy. The receptionists were very accommodating, with making appointments that were convenient for me and were always ready with information and a smile. So if you or your loved one need quality care I give this facility 5 stars out of 5!

I had complete shoulder replacement in Oct. of 2016. I started the therapy at home for six weeks and then went to Florida for the winter. When I was in Florida I need to continue therapy and was lucky enough to pick Orthopedic and Sports Physical Therapy Center. One thing that made me pick them was the one-on-one at each session, and you were not a number with bunch of patients. You do your routine and then spend 20 minutes with the therapist. The range of motion I gained is remarkable. I have the ability to do most things I could when I had two good shoulders. If I have my other shoulder done, I will come here again.

I had three cervical vertebral subluxations, and my quality of life through the years reached the level of misery. I tried to manage it with anti-inflammatories, muscle relaxants and deep tissue massage. One day, as I was contemplating surgery, I asked God for some mercy. I searched online for a sport medicine specialist and found Orthopedic & Sports Physical Therapy Center. My therapist treated my neck through a series of soft and asserted muscular manipulations and was able to decrease my pain from 9 intensity to a 2-3 in the first 1 hour visit. I burst into tears and hugged him! I found the mercy I sought in a place that I wasn’t looking for. I thought they were sports medicine/ortho surgeons. My 25 years of worsening neck pain vanished by visit #3, with out no needles, no medications, and most of all, no surgery! This is advanced healing! God bless them always! 100% recommended.

Please contact the webmaster if you have any problems with this site.

CONTACT ONE OF OUR THREE LOCATIONS
FOR MORE INFORMATION:

So That We Can Serve Your SPECIFIC Needs, Please Fill Out This Short, Simple Form And Show Us EXACTLY How You Want Us To Help YOU… The more we know about you, the better we can help you.

You have Successfully Subscribed!

Then please check your email account in the next 10 minutes for a personal reply from the OSPTC team.